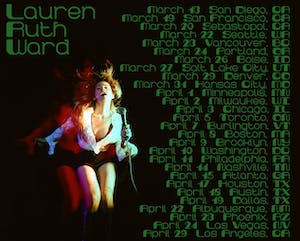 Lauren Ruth Ward's music has spread like wildfire these past two years in LA after leaving her hometown of Baltimore. Her lyrics are secrets to strangers, writing about her life’s trajectory sharing both vulnerability and strength delivered with grit and vibrato. Her band re-creates 60's rock and roll nuances, allowing Ward to release a powerhouse of raw, visceral emotion in their live show.

The full-length debut from Los Angeles-based band Valley Queen, Supergiant takes its title from the most massive and luminous yet fastest-burning stars in the universe. “The song ‘Supergiant’ is about how we’re all made up of the same stuff as stars, and I liked the idea of tying the whole album together with that metaphor,” says Carol. “It takes all the drama you hear on the record—the aggressive, chaotic moments, and the more beautiful or quieter moments—and puts it all into a more galactic perspective.”