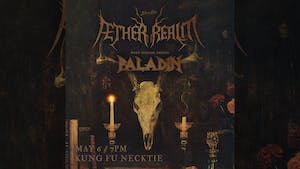 The band began recording their first full length in January 2012, and released the first single, Swampwitch, from the album in May of the same year. Their first tour followed, hitting the majority of the east coast in June. Their debut full length, One Chosen by the Gods, was released in January of 2013, and was accompanied by another short promotional tour.

Fast, melodic, and technical, Atlanta’s Paladin is on a mission to bring some European flavor to the US metal scene. The foursome blends soaring vocals, harsh rasps, catchy melodies, and fiery guitar work reminiscent of the 80s to create their own brand of thrashy power metal.

Founded in 2012 by Paul DeSanctis and Eric Dunleavy. Accompanied by Damian DiFrancesco in 2014. The Conjuring EP was released in 2015, followed by extensive playing around the greater Philadelphia area in support of local and national acts.

From the abandoned asylums and haunted pine barrens of Southern New Jersey comes High Council, an interminable force with one foot in Hell and the other crushing the throat of mediocrity. For years, High Council has been bludgeoning its loyal fans with ferocious epics of riff-fueled melodic metal. Consisting of Bob Saunders, Greg "Wolfman Vegas" McKeever, Steve Donahue, and Lou DiDomenico, High Council has released four studio EPs and a full length album, and has mangled audiences at venues all around the greater northeastern United States, consolidating their power in the Philadelphia area. With the release of their latest single, "Ember", High Council seeks to spread this God-forsaken madness to the rest of the world.