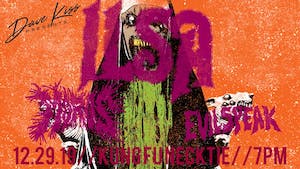 Formed in 2008, Washington, D.C.’s ILSA has wasted no time in spreading its unique brand of cloying, compelling death/doom throughout the underground and beyond. Ever since the release of its debut full-length 'The Maggots Are Hungry' (Odium Generis Humani), ILSA has produced nearly one effort every year, including three further full-length LPs and two splits with like-minded extreme metal comrades and Relapse labelmates Seven Sisters of Sleep and Hooded Menace. The band has shown just as much ambition on the live circuit as well – ILSA has played numerous festivals in D.C., performed Maryland Deathfest in 2013, and has played shows throughout the US with artists such as Windhand, Coffins, and many others. After the May 2015 release of the band’s fourth album, 'The Felon’s Claw' (A389 Recordings), ILSA signed to Relapse Records, and quickly released a split 12" with labelmates Coffins. The band is now preparing to write yet another full-length in the near future.