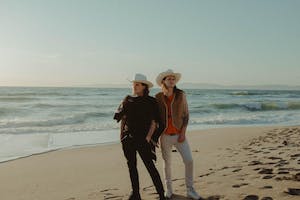 Mating Ritual is an independent Alt-Pop duo based in Los Angeles, California. Previously known as Pacific Air, Ryan Marshall Lawhon founded Mating Ritual in 2014 when his brother Taylor decided to go back to school. Initially a solo project, Ryan became increasingly more collaborative leading up to the debut album, 2017’s How You Gonna Stop It?, where the brothers realized they missed creating music as a duo and immediately began work on Mating Ritual’s sophomore album, the post punk leaning, critically acclaimed Light Myself On Fire.

As part of a one time joke that’s becoming reality, the brothers jumped ahead of schedule on their 5 albums in 5 years plan, finishing a third LP only months after LMOF. Named after their least favorite hashtag, Hot Content refines the sounds and ideas created on the first two albums, fusing the pop sensibilities of the debut with the more artistic impulses of their sophomore. Hot Content was released on May 10, 2019 through Ryan’s own label, Smooth Jaws, and quickly notched over 7m streams, adds at Alternative radio, and garnered laudatory press. Setting the stage for Mating Ritual’s first headline North American tour (Fall, 2019). Mating Ritual are gearing up to release their fourth Album in May, 2020.