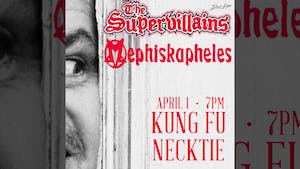 Formed in the East Village of New York City in 1991 by a group of punk rockers/artists/ad guys/jazz musicians, Mephiskapheles played its first show on Long Island. From day one, the band began attracting a diverse, dedicated fan base.

The Florida-bred swamp reggae rockers have been bending genres, partying hard, touring the world, and leaving tales of joy and destruction in their wake.

The Tone Bandits formed in 2017 with members from The Flyswatters, Sonic Screemers and Low Cut Connie. We bring a late 70’s punk style with a Philly attitude. Always a party when we play.

Since forming in 2008, Suburban Sensi have made a name for themselves by blending a unique mix of psychedelic rock influences with reggae, ska, funk, hip hop and even country to create a sound that is intriguing and mysterious yet uplifting and danceable and completely one of a kind. Growing their roots in South Jersey, Suburban Sensi was started by cousins Tommy Gonzales (Guitar, Vocals) and Steve Difalco (Keyboard, Vocals). The band had a few lineups before the current roster of Anton Milioti (Bass, vocals), Rich Flamini (Drums) and Ken Ditmars (Percussion). Suburban Sensi wins over new fans every time they step on stage, with their tight musicianship and unique performances, always getting the crowd involved and feeding off their energy. Sensi has become one of the most popular and in demand bands in the Tri state area music and festival scene playing tons of major venues, festivals, bars and parties. Suburban Sensi has shared stages with notable artists such as 311, Ziggy Marley, Moe, The Wailers, Matisyahu ,Yellowman, Keller Williams ,Bernie Worrell ,The Expendables ,Badfish and many others.