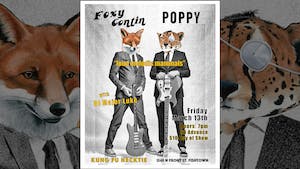 “...pure 90s awesomeness — guitars that are big and loud, vocals that soar with confident lyrics about self-empowerment and loving your city.” WXPN’s The Key

Poppy is a female-fronted alternative rock trio first formed in the early 1990s with members of 80s Philly punk scene favorites Electric Love Muffin (Brian Campbell) and Scram! (Craig Heim). Poppy released a number of albums, EPs and singles in the 90s and early 2000s and after a lengthy hiatus are back and sounding better and louder than ever. Recently Poppy has been written about by Dan Deluca of Philadelphia Inquirer and WXPN’s The Key. Over the past couple of years, Poppy has regularly played at local venues including Kung Fu Necktie, Johnny Brenda’s, Century Bar, The El Bar, The Mothership, The Underground by Round Guys Brewing, Art for the Cash Poor festival, The Tusk, Connie’s Rick Rack, and the Rusty Nail.

With a prominent rhythm section and Kate Campbell’s powerful vocals, Poppy plays a melodic blend of hard rock with a 90s alternative vibe reminiscent of Patti Smith, P.J. Harvey and a dash of the Foo Fighters. “Last 3 Dollars” and “Moomoo & Goadie” are standout rock songs combining thoughtful lyrics, upbeat tempos and loud guitars that would be at home on any alt rock radio station, while “Marga” presents layers of distorted sound and feedback over moody melody and lyrics.

Snakes of New Jersey was recorded with Brian McTear at Fishtown’s Miner Street Recordings in 2018 and 2019. Poppy teamed up with new Philly indie label Sister Raygun Records to release these songs as an EP on vinyl and CD as well as digital download and streaming.