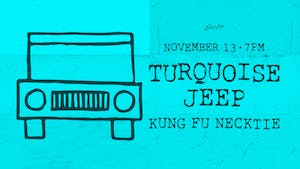 Turqouise Jeep toured repeatedly throughout 2011 - 2013, and continued to release new material. Flynt Flossy and Yung Humma also appeared on the track "Fuck Your Blog" by Childish Gambino. In 2013, the group released a freestyle collaboration with Humma, Flossy, and Whatchyamacallit. On December 23, 2013, the group released their second album, Existing Musical Beings.

Space Needle Mystery is a live-music take on a Choose Your Own Adventure paperback set to the tune of 80's quasi-futurist synth tones. A spitball of beats, rhymes, blow-by-blow audience interaction, and endearing animations by John Karel, audience members will collectively determine the fate of a middle school-aged protagonist.